Time for Catch-up: Limping Past the Starting Line

Well. This is timely.

OK, OK. So I've essentially missed the entire first fifteen percent of the season. So what? So has Jiri Hudler.

Alright, that was uncalled for. I should know better than to justify my failures by comparing them to the acts of Jiri Hudler. If that were acceptable, the whole world would be full of perverted sexual deviants, the economy would come to a screetching hault because nobody would be doing their damn jobs, and poor Danny Cleary would be perpetually concussed.

Truth is, it's been a busy month. I've moved back to the motherland, bought a viscous attack dog in case anyone from Chicago or Denver happens to walk by my house, and started actively contributing to society as a semi-functioning member of the work force. No excuse, though. I know that there are millions upon millions out there eagerly anticipating the results of the:


WINGED WHEEL'S "WHO'S GOT THE BIGGEST CHARITY BONER" CONTEST

Over the course of the few months that we ran this little contest, we managed to raise close to two grand for the kids. The selfless generosity of Wings fans, and the bitter, spiteful, donations of Hawks fans have really made a difference. I am proud of you bastards, and would like to move in with you all.

On to the results.

First up: the jersey. As I'm sure you're aware, the jersey signed by Hank Z himself was offered up in a raffle. Those who donated earned entries for each dollar put toward the kitty. Without further ado, the winner is: 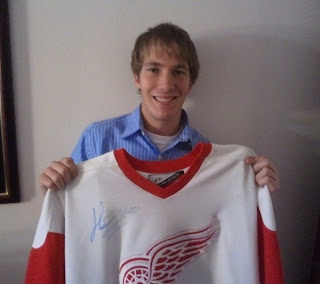 Good on ya, Matt. Now, here's the challenge. That jersey has managed to raise money for both H2H and Learning Through Giving. See if you can find away to continue to spread its magical glory in a selfless way. Or at least don't let any Hawks fans touch it. I'm just thankful that we don't have to watch it being pissed on by a hobo, or whatever the hell Hockee Night wanted to do...

Finally: The honor and glory.

Well Wings fans, I hate to admit it, but the Hawks beat you out. I don't know the exact numbers, because counting is for nerds. Suffice it to say, it wasn't particularly close. Of course, that has a lot to do with one Hawks fan, who I think we all know deep down loves the Red Wings. This eternal, firey, burning love is evidenced by his gigantic charity boner. This man is the president of awesome, the chancellor of greatness, and the csar of badassery. He made the biggest donation, by far, and as such, is entitled to redesign the banner here, and order up a Winged Wheel song (that will likely take me 15 years to make due to my new workload). Ladies and gentlemen, the man, the myth, the legend:

Jimmy D... claim your prize. Email me at [email protected] and let me know what punishment I must now take. As if watching the wings shit all over the early part of the season isn't punishment enough.

More to come soon, I hope. It's nice that the Wings decided to finally win a game, but I have to say I'm not quite out of the "fuck this" tunnel yet. One win is good... 50 is better. It's going to be a long road ahead to make that happen, and I'm not entirely sure the man behind the bench is necessarily the one to do it. We'll see, I hope I'm wrong. Hell, I almost always am.