That's More Like It: A six game streak I can get behind

Hey, remember when Jimmy Howard wasn't stopping pucks? Remember how I was all over his shit?

Remember how fucking wrong I was?

Super Jimmah, in is 138th consecutive start, was absolutely solid against Stevie's Bolts. Especially late in the game. Despite an onslaught of odd man rushes and drives to the slot by some of the games most dynamic scorers, Jimmah made save after save, clearly establishing - once and for all - that his birth was the result of a beautiful, orgasmic 19 hour love session between a whole chior of angels and a herd of unicorns on PCP.

Yes. There were other stars of the game. Pavel Datsyuk is a swell fella. We're aware. But because James has displayed such sheer good-at-hockeyness (suck on that Shakespeare) over the past uninterrupted decade of consecutive starts - he deserves a bit of a pat of the back. He convinced us long ago, but he's showing the rest of the world: motherfucker means business. 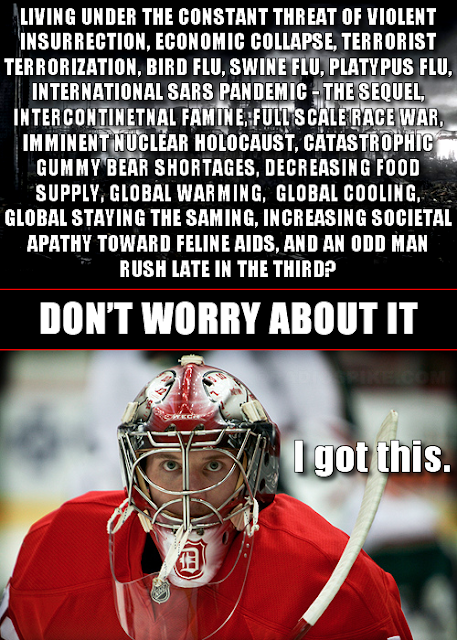 Wings play again on Friday. Now, our starting netminder has yet to be announced, but there are a couple of facts to help us figure it out:

I think it's a safe bet Super Jimmah's on his way to his billionth consecutive start. Honestly, at this point, I'm almost happy that our beloved netminder has been left off the All Start Ballot. If the write-in campaign isn't successful, it just might be his only night off until he's hoisting #12.

Wings are back on top of the central. That feels much better. Foot to the floor, pedal to the metal, keep on fuckin rolling.