Doin' Good: Do it for the kids and a jersey signed by Henrik Zetterberg 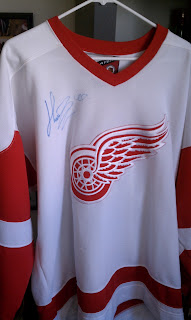 Want this Wings Jersey, signed by Hank Zetterberg? Read on.


Well folks, I'm in the midst of an epic battle with the Bar Examination (how cruel is it that it's named after the place you'd so much rather be than in a dark room studying?), but had to come out of a bit of this hiatus for a good cause.

It is a long and storied tradition, here at The Winged Wheel, to do everything we can to demoralize the Bandwagon who calls the wrong side of Michigan Ave home. Our anti-Blackhawks vitriol is well documented, as is our overall distain for the City of Chicago. This is especially so considering the fact that I've been residing here, dealing with the brunt of the bandwagon for some time. I've enjoyed the Shellacking at Wrigley of 2009, suffered through the Great Flash in the Pan of 2010, and rejoiced as the Wings regained their rightful places atop the Central Division in 2011. All of this experience has led to much distain and resentment, causing me to truly abhor all things Chicagoan that aren't hot dogs or pizza.

There is also a long and storied tradition here of absolute juvenile behavior. It's clear to anyone who reads anything written that I'm an absolute immature mess of man-child - a terrible sport who takes this game a bit too seriously and very much enjoys the excessive use of colorful language. Putting things aside and acting reasonably is just not my forte. It's how I am, and I'm not going to change. Not now, not ever.

Ok, well maybe just this once.

In a Winged Wheel first, we're officially putting aside our hatred for all things Chicago to embrace an outstanding local cause. A good friend of mine has started a very good cause to help some underprivileged children in Chicago schools. I'll let him explain:


My name is Michael Anton and I am a fourth-year student at Argosy University where I am working towards a Psy.D. in Clinical Psychology.  For the last year, I served as a Therapy Intern at The Genesis Therapy Center, a non-profit organization based in the suburbs of Chicago.  During my time as a Genesis Intern, I was given the opportunity to serve as a Title IV Representative in some of Chicago's underserved parochial schools.  This involved making classrooms presentations and activities in order to raise the students' awareness of the importance of avoiding drug and alcohol use and the imperative nature of reducing instances of bullying while also working to increase problem-solving skills.

During this experience, my fellow Interns and I had our hearts broken as we witnessed children going to school at facilities that could not provide for the students' most basic of needs.  It was rare to come across a classroom where every child had a textbook, notebook, and writing utensil.  The deficits got so severe, in fact, that staff had to ration out how much toilet paper or bathroom soap each child could use in a day.  These deficits have only been hurt by the government's decision to cut Title IV funding.

Because of this experience, I have decided that I am tired of just talking about the need for change.  The time has come for me to move beyond wanting to help so that I could make the notion of helping a reality.  My goal, therefore, is to raise $10,000 so that these kids can have the school supplies and hygiene products they all deserve and so that Genesis can continue funding such a beneficial, in-class program.  Please join this cause and, together, we can make a tremendous difference in the lives of so many children.


Hockeytown, you've got a hell of a track record when it comes to charity. In the last two years, you've raised over $19,000 for the Children's Hospital in two epic events. You've answered the bell when it's been rung, and despite what Mr. Lambert may think, you've proven yourselves the most generous fanbase in sports. You're also all very attractive, and your genitals are significantly above average in both length and girth.

So what am I asking? Simple. Keep it up.

Here and at the bottom of this post is a link to the Learning Through Giving Cause from causes.com. Go there. At the absolute very least, join the cause and post it to your Twitters and Facebooks, Google Plusses and LinkedIns and Yelps, Tumblrs, Diggs, Reddits, and AOL "Fans of Wilford Brimley" Message Boards. You crazy kids and your internets.

But, if you can, do a bit more than that. Toss a donation their way. The money will be put to great use helping kids get their learning on in an environment where they won't have to worry about toilet paper rationing. Don't hold it against them that they're from Chicago. Look, if I can put that aside - you sure as hell can.

Hockeytown, I am absurdly confident that you are more than capable of rising to this challenge. Mike's got a goal of $10,000 by the time the Wings have brought home the 2012 Stanley Cup. It's going to require everyone to pitch it to get there, so please, give whatever you can spare.

However, that does not mean that there's nothing in it for you. As an added bonus, introducing:


The Winged Wheel's "Who's Got the Biggest Charity Boner" Contest

You know, or whatever else you want to call it, in the interest of appropriateness.

For all those who donate, join the cause, or recruit others, you'll be entered into a raffle for a Red Wings Jersey, signed by Henrik Zetterberg shown at the top of this post.

A couple of years ago, at H2H, I was lucky enough to win this bad lad as a raffle prize. It's made its appearance at one exhibition game, but has otherwise sat in a revered corner of my closet. Well, I'm confident it can be put to better use, and what better use than this?

Everyone who joins and passes along the information to others will get an entry into the raffle. PLUS, you'll also get an entry for every dollar you so generously choose to contribute. By following the links below, you can donate any amount.

AS AN ADDED BONUS: For the individual who donates the highest amount, I'll throw in the following:

All payments are completely secure, and all donations are Tax Deductible. If you'd like a receipt, just email me and I'll make sure that happens for you.

All entries before puck drop for the Wings season opener on October 7th against Paul MacLean's moustache will be entered into the contest.

Email me or inquire on the twitters (@captnorris5) if you have any questions. Also, if you've got something to donate to raffle off as well to sweeten the pot and help entice even more good deeds, shoot me an email and we can put it up.

Also, while you're at it, go ahead and "Like" this shindig on the book of faces by clicking here.

Folks, if Puck Daddy can raise over $6k for a dumb little joke on the back of a sweater, then we can make big things happen here. You've blown me away more than once in the past, lets do it again. Thanks so much for all your support for this cause, and Go Wings!

*For clarity sake, nobody associated with this site is affiliated with Genesis Therapy Center. The representations above are mine and mine alone. All donations given as a result of this little shindig are just those - donative gifts. In the unlikely event that the jersey is destroyed or damaged before the end of the contest, I reserve the right to cancel the raffle. In such an event, the donations will not be refunded. Plus, what kind of jackwad would ask for a charitable gift back anyway? I just had to throw that in there because I spent three years and way too much of my future earnings on a stupid law degree, and I figured I'd get my money's worth. Anyway... back to the nightmare that is studying for the bar.
Posted by CaptNorris5 at 5:27 PM

This is so damn nice of you!!!

I can't even imagine needing to ration toilet paper. That is so unspeakably sad.

(Wish I had something cool to donate to help out, but alas, I have nothing so awesome as an autographed jersey...)

Nice to see they're offering delivery to Chicago.

It's on...can't wait for the shirtless Kane banner.