Edit: Just so we're clear - I still revere Ken Holland as the best GM in sports. Frustration over an absurd contract aside, the guy is a superhero. Hyperbole is fun.

The start of free agency period tends to get people - let's say - riled up. The season is over, the Cup has been presented, and the awards have been handed out. With no hockey on the air, we start to get a bit fidgety. Hell, we're in hockey limbo - that nebulous period between the end of the previous season, and the start of a new.


All of this fidgeting gets us a little crazy. We start suggesting crazy things, like "we should trade all of our draft picks for the next six years for a dman,"or, "lets give a forward $70 billion," or, "we should offer Jaromir Jagr a contract."

Luckily, this haste to do insane things separates us from the men at the helm of our beloved teams. Well... for most of us.

See, there are probably about five or six Panthers fans out there (I know, I'm being generous) that are amazed that somehow, some way, their GM has found a way to out-crazy them. Yes, we're talking about none other than the postally inept jagoff himself - Dale "suck my way to success" Tallon.

See, Dale worked for Chicago for some time as the general manager. Then, he got a job as GM in Florida. Unfortunately, Dale forgot he was fired by Chicago, and decided to keep on working for the Windy City.

See, we were all kind of surprised during the draft when it was announced that some how, some way, the Hawks managed to unload Brian Campbell's contract. This, the man who was being paid $7m to cough it up in the neutral zone more than a pack-a-day smoker with pertussis on the 38th parallel. (ba-dum-chik) Yes. Tallon took that contract... again. Not only that, but he then traded for the rights to Tomas "I suggest you use a 9 iron on this shot, Sir Marian, sir" Kopecky. He then promptly engaged in cashkake all over his face.

Hilarious, right?
See... apparently, lunacy is contagious. There at the draft, GM's were all in one room, huddling together - talking about possible trades. I assume the epidemic may have started with Paul Holmgren, who thought it was a great idea to trade away his best two players for nothing so he could sign Ilya "Parks and Recreation" Bryzgolov, apparently because... he wanted to do better in the playoffs? Still, wherever it may have started, it spread. Our ol' buddy Dale is obviously genetically disposed to the disease, as he seems to contract it every year. But the epidemic didn't stop there. 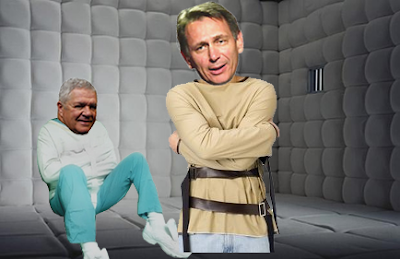 Yesterday evening, it was announced that the Detroit Red Wings have come to terms with one of their targeted unrestricted free agents. After Rafalski announced his retirement, the Wings had a hole to fill on defense. With keeping pucks out of their net a major concern, this UFA's carreer -11 really spoke to them. His 15 points in 74 regular season games during the 10-11 season really showed how valuable he is. Most of all, they were impresssed with his ability to completely forget he is a defenseman, join the rush with a bunch of 3 liners that aren't much of a scoring threat, lose the puck, and bail on his assignment. Having watched this tactic work out wonderful for years with superstar Brett Lebda, who could let this talent get away?

So, what a relief when after weeks, months(!), of negotiating, the Wings were able to hammer out a contract at the eleventh hour, before Brian Burke could offer him sixty-jillion dollars and thrice weekly old-fashioneds.
WHAT?!

That's right. On the eve of the first opening day of free agency where we've had some actual cap space, in a year before our three best D-men are headed toward unrestricted free agency, in a cap world where saving money and geting values are essential to contending for a cup, Ken Holland, formerly known as the best GM in sports, signed an absolute, shit-for-brains dipshit of a defensive liability to a near TEN MILLION DOLLAR contract.
For the record, I hope I'm wrong. I really really hope I'm wrong. I hope that soon we'll be looking back at this thinking, "see, we really do have the best GM in sports. He saw an opportunity that literally nobody else in the world saw in the potential of Big E. He looked past his shitty performance and hinderance to our success, and knew what the hell he was doing. He probably wasn't on crystal meth at all!"


I hope that the second after I publish this, it's released that Ericsson has been traded to the Kings for Drew Doughty and Anze Kopitar. I hope that some how, some way, this isn't the dumbest move the Red Wings have have made this side of un-retiring Aurie's number 6.

I just don't see how that's going to work.

The above picture was the saddest I've ever been while photoshopping something for this silly space for me to rant and procrastinate. I really really hate to disparage a guy like Ken Holland. But holy hot damn tiddlywinks - what the hell?

Kenny, you're letting me down. First, you refuse a promotion that could have kept The Captain in the motor city. Fine. Whatever. I get that you're a GM, and you like being GM, and you don't want to not be GM. I guess we can go five years without Stevie Y... (you dick). But to turn around and do something I simply cannot wrap my mind around? To not only sign a guy who sucks as long and hard as a Binford Shop-Vac that Tim "The Tool Man" Taylor got his hands on, but to do it for so much damn money? I'm so pissed off I could write a list: 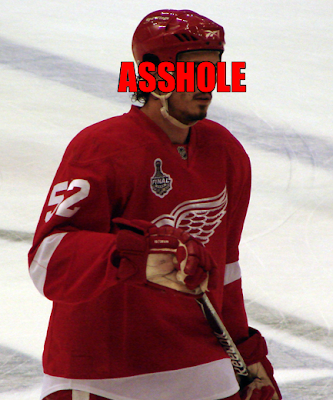 That, my friends, would be found in an article entitled "Wanted: Dead or alive, get him off this team." Son of a bitch.