Grievances: Martin Luther's got nothing on me

We lost. I grieved. Then there were three more damn games to drag me back in. More grief. Huzzah.

However, immediately after Wednesday's disappointment just wasn't the right time to start the bitchfest. After all, the team who didn't show up for the first three games turned around, picked up the pace, and made a series out of it. Instead of continuing the biggest roll-over this team has seen in an absurdly long time, our team gave the fans something to watch. During that resurgence, we got some of the best hockey I've ever seen.  So, before I start this little sulky diatribe, let me make clear: I sure appreciate that late effort. The Wings almost did what seemed impossible. They almost made history. They almost cleared a direct path to 12, because there's no damn way any of those other teams would be standing in the way of a rejuvinated Wings team.

But therein lies the problem.
Make no mistake - the Red Wings should have won that series. Even though they took the series to 7 games, rallying from a 0-3 deficit, this team underperformed. Since mid-November, that's been the case. Yeah, yeah, I know. 20 consecutive playoff appearances. 11 consecutive years of putting up over 100 points in the regular season. A division championship. By most metrics, this was a pretty damn good year. Most metrics.

Fuck no. You don't get to be internationally recognized as an arsonist by settling. You emulate Sherman, march to the sea, and burn that motherfucker down.

Unfortunately, the Wings stopped after striking one match. They started off OK, but fizzled out well short of burning everything in their path to the foundation. Hence: the disappointment.


The Winged Wheels List of Shit We're Pissed off At and/or About
Apparently, the Jiri Hudler Motivational Song just wasn't strong enough. Sure, Happy was able to turn his season from a 6 point pace to something a bit better. In the middle of the season, dude actually helped out a bit. Hell, when he was on that line with Cleary and Dats, he was downright dangerous. But again, in Hockeytown, towing the line in the regular season just isn't enough. It comes down to post-season success. It's why I'm, more or less, totally OK with the fact that Marian Hossa doesn't don the Winged Wheel. Sure, he was outstanding in the regular season. Sure, he filled that hole of the extra sniper/30 goal scorer that this team seems to desperately need. But when it came down to the time to actually show up when it mattered, the dude went away.  This season, Happy didn't even fill the category of being altogether useful in the regular season. His entire purpose was to provide us with fodder to joke about and to take up valuable cap space. Then, came the post-season.

Oh, but maybe he contributed elsewhere. Played defensively responsible Red Wings hockey and didn't do anything to single handedly severely handicap our ability to advance, right?

In Game 7, Happy decided to jump into the play, finally, by getting physical. After watching San Jose beat us in the checking game for most of the series, Hudler took a cue and stepped up. Unfortunately, his time in Russia must have exposed him to some weird ass radiation that made him color blind. Rather than using the body against a shark, Hudler decided to do the only logical thing his drug addled, syphilitic Czech brain could figure out:

In what would be a blatant violation of Rule 48, had Cleary been playing for the other fucking team, Happy took initiative by blindsiding him. Right in the dome. Cleary hit the ice and didn't return, as he had just suffered his first career concussion.

That's right. Not only did Hudler take a damn good role-playing, hard-working, relatively productive player out of the most important game these guys have played since June of 09, he potentially seriously affected the rest of his career. Good job Happy. Now take off that jersey and don't ever fucking put it on again.

By the way, the Winged Wheel was able to get this exclusive picture of Professor Zap Him in the Dick himself, taken shortly after the loss: 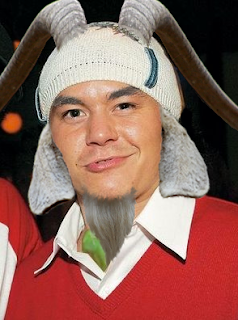 Fuck off, Goat.
There was a dramatic difference between the way this team played in Games 1-3, and the way they played thereafter. The best illustration thereof came at the end of Game 6. Like they did frequently throughout these playoffs, in facing a loss, the Sharks started acting like horrendous bitches. They all crashed Jimmy, piling on top of him, clearly attempting to rattle at best, injure at worst, our best player not named Norris.


In the first few games, the Wings reaction to that kind of spineless action would have been to watch while Jimmy defends himself. The closest they would have come to reacting appropriately would be to wait until a ref looked at them and then slash the offender in a way that allowed them to dive to the ice and feign injury. At the end of Game 6, they were finally playing like a damn team. They dropped gloves and stood up for the guy they left hung out to dry for so damn long.

The part that pisses me off? Why did it take to the end of game 6. Everyone ended up making a big deal about the diving and the intentional snow showers being blasted into Howard's face by those bitches in teal. You know how that wouldn't have been a problem? If in Game 1, Abdelkader, Ericsson, Bertuzzi, fuck - even dipshit Hudler would have grabbed the first diver/showerer and broken his damn jaw. If the refs aren't going to police the game, its time to do it your damn selves. I understand the concept behind avoiding retaliation, and getting payback on the power play. But when the officials are calling the game in such a way that rewards the diving and doesn't penalize the unsportsmanlike play, relying on the man advantage is kind of fucking stupid. Especially when your power play has a wicked case of whiskey dick.

I can't help but think that this series could have been a lot different if one friggin player would have shown one ounce of initiative in Game 1, and would have stood up for his team. Why the fuck do we have a 6'3" defenseman if he's not going to bother to be worth a damn?

Which brings me to:
Recent reports have indicated that Big E has decided to be a Big Dick. In a move that has me wishing Stevie would have stuck around and taken over a bit earlier, E was offered a multi-year deal with the Wings valued around $2m a year. Ericsson, in a shrewd career move, turned it down.

So... Kenny Holland, easily the best GM in sports, offered ERICSSON a deal that not only keeps him around for another year, but for several? And he wanted to pay him more than the league minimum?? What the hell world are we living in? What exactly was Kenny watching?

Was he really that excited about the several games where E decided to fill in for the gaping hole Lebda left in our blue line by jumping the rush every chance he got? Did his irresponsible pinching give Kenny a chubbie? (Ha, that sounds funny) What the fuck...

This is, by far, the most frightening thing to come out of all of this. Ericsson was, by far, our worst defenseman all year. He played one good game, which was luckily game 6. But apart from that, he has no purpose wearing the Winged Wheel. Hearing that Holland offered such an absurd deal is terrifying. It seems to indicate he's starting to lose is damn mind. Either that or he lost a bet to Glenn Sather.

Nothing is scarier than losing faith in the brain trust... which brings me to
Oh. There'll be a bigger post on this issue. Suffice it to say, it is the Winged Wheel's official position that Babcock needs to go. I'm over it. No more above ground pools full of fake tits and Jack Adams trophies. Why? How about a few reasons:
I'm not saying Babs is a bad coach. Far from it. His resume is a clear indication that he's one of the best in the league. However, there are some serious indications that he's lost this team. They've underperformed and haven't been very defensively responsible since we won the 08 Cup. Something needs to change.


Plus, the last time that the Wings didn't make the Conference finals for two consecutive years - the coach was Dave Lewis and he was on his way out.

Either way... this has been rather depressing. There's still hockey being played, though two of the teams are full of enough chokers, dipshits and floppers that they shouldn't even be in the playoffs, let alone contending for a Cup. Fuck the Western Conference Finals. 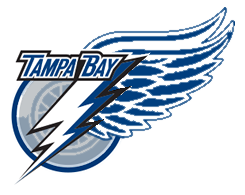