H2H2: 14,000 reasons why Wings fans are better than everyone else

There are just some things you can't argue with. Things supported by science, logic, and reason. Things that have been demonstrated true so often that they must be considered undisputed law. Gravity, death, nobody showing up to a Phoenix Coyotes game. Add one more to that list.

This weekend, like many of you, I had the honor and privilege to join a couple hundred die-hard citizens of Hockeytown to help raise some cash for some sick kids, watch our team skate in its storied home arena, and engage in general debauchery and silliness. Mission: Accomplished. 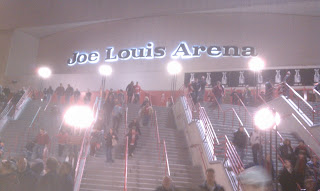 This event, like last year was and next year most assuredly will be, was one helluva time. Getting to meet new friends that you've already known for some time makes for a badass experience. I won't attempt to list all of the outstanding MFers I had the opportunity to meet, re-meet, and catch-up with here because, well, there was cold Molson on tap and I'd invariably miss far too many of you. However, J-Rock and I enjoyed every second of it - from walking in the door at Hockeytown Cafe to stumbling back to Chateau du Herm just a couple of hours before I needed to board a bus, and you lovely bitches and bitchettes had everything to do with it.

More importantly, however, this wasn't just some get-together of childish juveniles with a strong collective affinity for the Red Wings and alcohol. Nay. Any fan-base can simply get together and make bad decisions without leaving their stamp on anything more than a bar tab. But that's really not how we roll.

Nope, this adventure was about a bit more than ourselves. Citizens of Hockeytown across the globe banded together for a higher purpose - the kids. I cannot begin to explain how proud I am of our fanbase for raising over $14,000 for the Children's Hospital of Michigan. Luckily, I don't really have to, as I know you all feel the same damn way. What began as a halfassed band of over-enthusiastic Detroit transplants and die-hards pitching in to make something cool happen turned into a repeating event wherein 5 figures were scratched together in some admittedly difficult times to help those who really need it. Fuck. Yeah.

As I mentioned several run-on sentences ago, this just proves a long-known law of the universe: Wings fans are simply better. It's just the way things are. And, just as any good law of the universe, it comes with several seemingly-unrelated but scientifically-accurate and absolutely indisputable corollaries.  Which leads us to:

The Winged Wheel's List of Indisputable Shit About Wings Fans
Remember... this is science. No arguments.

A special stick tap needs to go out to some people who were particularly instrumental in the success of this event. Jenn MacRostie (@jennyquarx), Ellen (@inhyung), the fellas from TPL - Petrella (@mpetrella), Hollis (@chollis), and Disch (@512Disch), Casey Richey (@MrNorrisTrophy), Ms. B (@Baroque), The Chief at A2Y and I'm sure many others that I've just personally slighted. Try not to hold it against me. Seriously, you people (YOU PEOPLE?!) are amazing and did one fucking helluva job. If only I had the time or inclination to photoshop you into an above ground pool of fake tits like last year. You'll have to use your imagination this time.

Wings face off against the red-hot Caps tonight. Unfortunately the Wizzard isn't quite ready to go, and Joey Mac has been called up. I can't help but think Ozzie owes the Griffins some favors or something, and is simply trying to spare them Joey's goaltending by citing continued soreness. Either way, time to string together a hot streak before April in the D kicks off. Taking down a team on a streak is a good way to show that's about to happen.

Oh, and if you missed it because of the H2H2 festivities, be sure to check out the new poorly done Winged Wheel song for the Commissioner.

Go Wings and let the countdown to H2H3 begin.
Posted by CaptNorris5 at 2:18 PM