After two back to back performances like those, you'd expect me to unleash a (well-deserved) string of ephitets and childish obscenities. You'd expect me to photoshop some kind of image of a player who really dropped the ball today in some completely disrespectful way. You might even expect me to go stand on the roof of my building in a cape, vowing to turn to a life of evil villainy.

No. Today, I will respond with reason. Objective calculations. Science. 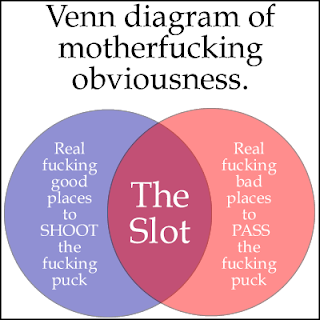 Swing and a miss.

OK, so maybe I'm not really approaching this bullshit with reason, logic, and all the power of millions of years of human evolution. Perhaps I am reverting to my usual childish ways, but fuck it. Twenty-four hours. Two games. Both against division rivals. Both against teams that have been slumping.

Call me spoiled, but I really just can't be that happy that our team has finally decided to NOT give up 5 goals a game when they don't even bother to score ONE.

It'd be one thing if we just came into two super-hot goaltenders who were making unbelievable saves behind an incredibly solid defense. But, while Mason and Rinne were good, this was all about the Wings failing to do their jobs. Far too often, they'd manage to carry the puck right into the slot. Inches away from the net, they'd wind up. They'd set their sights, take careful aim, and prepare to let her rip.

Then they'd turn around and pass it to the perimeter.

Now, I know I'm no hockey professional. And hell, I'm more than willing to admit I'm wrong all the god damn time. But I'm fairly confident that this is a stupid fucking gameplan. Taking the puck to right in front of the netminder, and passing it to a shitty area to shoot from seems counter productive. Perhaps it's just me.

Well shit. It's been a while since I've written, and apparently it took a bunch of bullshit to get me motivated. I guess that makes me an asshole. I'm OK with that. But in that spirit, it's time to present:


The Winged Wheel's List of Shit I'd Like to Maul with a Claw Hammer Right About Now
Oh boy. Uncle Mike has a myriad of reputations. A hard-ass. A demanding coach. A nutjob canadian wolf hunting man-boy. Among those? A guy that likes to fuck with us by juggling lines pretty much during active shifts. Most of the time, the guy can't make up his fucking mind. Dats-Z-Homer. Mule-Z-Bert. Dats-Helm-Hot Dog Concession Guy.


Well what the fuck happened to that in the last 24 hours?

It took 5 (five. five. FUCKING FIVE!) scoreless periods for Babs to finally decide that the trio of fancy-passers, Mule - Z - and Fucktuzzi, wasn't working. It took 100 minutes of play of these three dancing around the perimeter, refusing to drive the net, and chipping passes to each other until the opposition decided to turn it into an odd man rush for Babs to finally decide to maybe put someone on that line who was playing like they gave a flying fuck. 100 minutes of scoreless fucking hockey to stop trying to ram a square peg in a round hole.

Why? Why stick with that shitass garbage, but when we're winning, change lines on every damn shift? Did Babs lose a bet to Jiri Hudler or something? Perhaps he was too focused on the post-game scrum of Hungry Hungry Hippos to figure out a strategy for a game that might result in a goal or three?
Johan Franzen. When he's on? Holy shit, watch out. During the playoffs? Hot damn. Point per game - easy. Single handedly unclefucking every team he faces. During the regular season?

Depends on if he decides it's a good day to show up and play some hockey. I really don't think Mickey's all that off with his assessment that Mule could be our next 50 goal scorer. He's clearly got that touch. He can crash the net like a powerhouse. He can dangle with the best of them. He's built to friggin score.

That game against the Sens? Mule's uncle was in the stands. He decided he gave a shit. He scored 5 goals. Thereafter? Seems like dude figured he'd built up some capital and could just turd all over the ice for two straight games. Sure doesn't sound like Mule, but he was quite possibly the worst player on the ice since his single-handed knucklefuck of the Sens.

Well... two outa three right?
After the 5th straight period of yumming chode, I made a quick wish to the Hockey Gods. I wanted our young, scrappy grinder who's been in a bit of a slump lately to provide the spark that can light a fire under this teams ass in the third period of a shitshow of a game. Drop 'em, Abby. The Preds are ready to scrap. Engage in fisticuffs.


Early in the third - holy shit. On the other side of the ice, away from the play, Justin Abdelkader and a Redneck Inbred, er, Nashville Predator tangle up. Abby's ready to go. He shakes his gloves free, and drops his stick. Not only that, but Ladies and Gentlemen, we have a taker. Here we go. Old time hockey. Two athletes ready to defend their team's honor. Ready to throw down like so many have thrown down before. Fists clenched, eyes locked, they begin to engage and - wait what the fuck?

Oh. No no. Gary wouldn't like this. No he would not. No fighting! That would just be far too entertaining and strategic!

The shitbird officials drag the two willing particpants apart - then giving them each penalties for some crazy shit. Two minutes for trying to make this fun to watch!
Hey... Alice... you're from Allen Park. You don't show up to a game in Nashville and provide entertainment for the enemy. You damn well beter spend that time actively rooting for the Wings. I get it... those "Schools Out" residual checks probably aren't that huge anymore. But fucker... honor thy roots.
Hey dickholes... this is the NHL. Conduct yourselves accordingly. Sure - I suppose I get the allure of acting like a freshman-drunk frat boy at a professional sporting event, but lets make it a bit less about how fun it is to yell the word "suck" and more about the game, alright? Sell out crowd at Big Bo's Pork Rinds Arena? I'm guessing that has more to do with the more-tattoos-than-teeth confederates that wanted to see whoever the hell ate Vince Gill during intermissions than watching the product on the ice.


Seriously, that chant sheet might have been the most unoriginal piece of shit I've ever read. Gotta give props where its due though... I didn't expect that many Preds fans could actually read.

How 'bout we score a fucking goal next time, ok? Dats is back Monday. Let's hope that lights a spark.
Posted by CaptNorris5 at 11:43 PM

how is the slot part of both real good and real bad. seems like the slot is always a good place to shoot. this venn diagram is fucked

Take another look. It's a real good place to shoot; real bad place to pass.

Though... the joke loses a bit of its allure when it's explained.

Thanks. You've ruined everything! Now I have no choice but to don my cape and turn to a life of crime. This is on you!