The Importance of Rest: Why exhaustion kinda blows

Only a couple of days until Brad Stuart and his busted jaw rejoin the lineup for the Winged Wheel. This is huge for the Wings. We've had some serious difficulty with our defense since the big man left our lineup. It's been tough to keep pucks out of our net, and shots away from our netminders, especially with Kronwall and E doing their best Lebda impressions. Stuart's return, hopefully, will be a harbinger of better defensive effort in the near future. Incidentally, it is also an outstanding excuse to use the all too underused word "harbinger." Fuck yeah, harbinger.

We've already got Dats back on the ice, and Modano is aiming for a return in only about a week and a half. ValFil is out for a bit, but hopefully (fingers crossed, Mr. Aurie) he won't be out long. A healthy-ish lineup will go long ways to adding to our depth, and helping with consistency.

However, as exciting as all of that is, there's a player that's been hurt whose return I'm anticipating more. Granted, he took the ice on Sunday, but he was in a suit at the time rather than in pads. I'm talking about Chris "400 Wins Means Hall of Fame, Bitches" Osgood.

Yeah, yeah. I know. One of the dead horses I so thoroughly enjoy flogging around here is about how much I dig on the Wizard, and how I just don't think he gets enough love. But this is different.

As much as I'd like to see Ozzie pile on some extra wins to keep moving up that ladder of all-time greats, his return means more than a quenching of my unapologetic fandom. To me, the faster Ozzie's able to make it back, the better our playoff chances are.

Now, before you lose your shit, screaming and yelling about how Super Jimmah is our playoff netminder and how I need to stop living in the past, hear me out. I agree. James is our #1 guy, and if we are going to lift #12 this June, he'll be the guy backstopping us to the finish line. But he can't do it alone.

The fact is, Jimmy's been playing a lot. With Joey Mac as the only other option, Babs has had to rely on Tiberius more often than he likely would prefer. Howard has answered the bell, and has done a good job of winning games even when the Wings decide it would be funny to watch him get pelted with shot after shot. It's provided pretty good results in the regular season so far; the Wings sit second in the West, first in the Central.

But that's the trouble, idn't it? We're Wings fans - not really all that interested in the regular season. Call us spoiled, entitled, absurdly attractive, etc., but when it comes down to it, there's only one thing that matters for the Winged Wheel:

Well, and May and June, but you know what I mean. We've got a team that's mostly built for the playoffs. Lots of forward depth, grinding stifling defense (when they're not Lebdaing it up), and the best coaching mind in the game right now. The big question? Goaltending.

I have no doubt, that Jimmah is talented and driven enough to take us to the promised land. The trouble comes down to stamina. Last year against the Sharks, it sure looked that young Howard faltered, due in no small part to fatigue. His focus seemed to wane a bit and he started letting in goals that he easily turned away during his dominant regular season performance. Since, he's been very strong, but still looking shaky at times.

That got me thinking... is he playing too much? Well, in what might be a first for The Winged Wheel, I decided to use facts, logic, and reason to answer. I took a look at all of the goaltenders who played in the Cup Finals over the last 10 seasons and how many regular season starts they got to compare, and see if there's a trend.

...And now for something completely different. 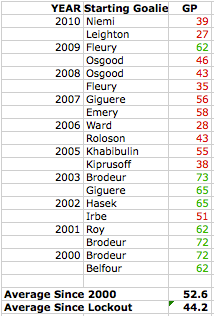 
Currently, Jimmy is on pace to match the 63 starts he had last season. Say that keeps up and we manage to hoist number 12 in June. At that pace, Jimmy will have more regular season starts than any other goaltender to appear in the finals since the lockout. The only netminder to have come close would have been Marc-Andre "Pick one fucking name, Douche" Fleury in 2009 with 62 regular season starts.

Not to get all TPSH on you, but its interesting that there seems to be a trend since Gary's Biggest Clusterfuck. Prior to the lockout, the goaltenders appearing in the finals featured some pretty elite names facing some pretty serious playing time. Granted, much of that likely has something to do with the idea of elite teams having elite payrolls leading to elite goaltending, but still. Since the lockout, the average regular season games started for goaltenders in the finals is a meager 44. Jimmy's already started 43.

This isn't to say a team can't win with a netminder who sees more starts, but I'm not sure it's a super good idea to test it. After 63 starts last season and one especially buttfucking workload down the home stretch, we saw our intrepid young netminder falter a bit in the second round. I think we can all agree that, for Detroit, the Conference Semi-Finals just isn't good enough.

That being said, with Nashville only 6 points behind us in the standings I'm not sure we can afford to jump full swing on the J Mac train, as it only tends to stop in Fuck Springs and Soft-Goals Township. But it's a damn good reason to keep our fingers crossed for a speedy return by the Wizzard.


Whatdya think? Is Howard seeing too much ice time? Is he young enough to endure? Has any of his relative shakiness had anything to do with being overworked? Can I have some of your money?

And with that, I conclude my brief stint down facts and logic road. I promise I'll try not to do it again. It feels dirty.
Posted by CaptNorris5 at 6:04 PM