It's officially the last day of voting.

I know that you've all been tirelessly parading on down to the polls, casting your vote for Curly Fries. But now is not the time to let the proverbial foot off the pedal. In fact, the waning hours are often the most critical period of an election cycle. Time to up the game.

Now, Wings fans have been doing plenty to make this happen. A team of dedicated demi-gods have been working to sway the vote all over the globe. Votes have poured in from every region of Hockeytown, even the Norwegian and Brazilian sectors. In fact, there have even been some reports that votes have come from such far away and exotic lands as South Dakota. Personally, I don't buy it as I'm still not convinced anyone actually fucking lives there. But still, the point remains. Plenty has been done.

So what else can we do in these final hours of voting, before the announcement is made tomorrow at the Big House?

Well, residing here in Chicago, I've got a few ideas. Now, Detroit does just about everything better than Chicago. It's simple science that we're just better human beings. However, there's one area where we could stand to learn a few tricks from Bandwagon Central.

I know, Detroit is no stranger to shady dealings. We've had our fair share of garbage politicians who take office for no other reason to knucklefuck an already struggling region for their own personal gain. The difference, though?

Ours suck at it.

Chicago, though a horrendous offender when it comes to bandwagoning, produces some seriously good shady politicians. For some reason in Detroit, our politicians tend to seek bribes that basically amount to a new 32" television and lunch at Lafayette. And then they go to jail for it.

Here in Chicago? I'm pretty sure it's not even legally considered a bribe unless it nets more than what Brian Campbell gets paid each year to cough up spin-o-rama turnovers in the neutral zone. Even then, politicians just don't get convicted here. They know what they're doing when it comes to rigging elections, using the results to their own personal advantage, and walking away flush as Cristobal Huet. Ha, 'member him?

So what lesson can we take from our rivals down Michigan Ave? How about


The Winged Wheel's List of Backdoor Dealings and Shady-Fuck Politics*
No, we're not talking about Happy Hudler's Thursday night. We're talking about the classic tactic of inflating the votes to get your way. We've already employed one of the most common Chicago techniques of voting over and over again. However, how many of us have really taken it to the next level? For example, how many corpses have voted for Curly Fries so far?


Now to make this happen, we're going to need some dead people. So, I'd like to officially advocate that everyone out there reading this go grab a spade and march off to your nearest cemetery. Make sure you look for the plots that look like they're freshest. I know it's getting late in the season, so the ground is likely pretty frozen. So, if you have a bad back, I encourage you to just go to the nearest funeral home. This will require much less digging, but some serious cunning in creating a distraction. I'd suggest the tried and true "Hey everyone, look over there!" technique.

After you get your freshly passed body, you'll want to employ a method that scientists call the "Weekend at Bernie's Technique." Make sure to throw some sunglasses on that bad lad and tie some strings to his extremities. You'll then want to build some kind of device to manipulate your new corpse like a puppet to continuously refresh the voting page, and cast a vote for curly fries.

I know what you're thinking... this is a a great idea! You're god damn right is. Now go desecrate a dead human body.
Another method employed in the past by Chicago politicians is good ol fashioned voter intimidation. As many Chicago gangs have learned, nothing helps motivate voters like a gun in the face. Well, now that people can vote from the comfort of their own homes this job is even easier. You don't have to drag anyone to an inconvenient polling place. Rather, you can just go from home to home, kicking doors off their hinges and threatening the safety of people's children during dinner time.


Also, feel free to get creative. It may be enough to simply warn your neighbors that you'll sell your house to Todd Bertuzzi if Curly Fries doesn't win. The sheer fear of having their children grow up next to a man who engages in live-human sacrifice on his roof may terrorize them onto our side.
So long as all this hard work pays off, we're going to find ourselves on the winning side here. And that's a nice place to be. But we shouldn't be content with simply winning and moving on. We should take a page out of Chicago's book and make sure we use our victory to our advantage.


You see, winning an election puts you in a serious position of power. You have influence and authority, and it's fucking golden, and, uh, uh, you aren't just giving it up for fuckin' nothing. Right? 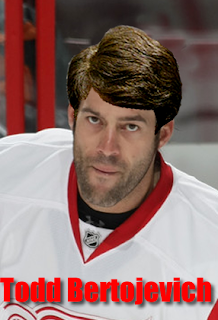 How to Save on Helmet Costs

Once Curly Friest emerges victorious, use the victory to your advantage. First, stop paying for things. If you see something that you want, just take it. If, for some absurd reason, the storekeeper has a problem with this, just calmly explain about how you are a game-changer. I'm sure they'll understand and gladly give you whatever you'd like to get in your good favor. If you're having a difficult time at work, fire your boss. Just march right in and tell him how its just not working out and he'll need to pack his shit and get our of your new office. Don't just let your newfound position of influence fall to waste. Use it to your advantage.

*The Winged Wheel takes no responsibility for any negative side-effects of you being a fucking idiot and taking even one tiny bit of our advice.
Posted by CaptNorris5 at 6:39 PM