Not So Happy: How to turn that frown upside-down

Pace? Full speed.
Direction? Ahead.
Cylinders? Firing. All of 'em.

Well... mostly all. The Wings are currently best in the West. In the last 22 games, our team is rocking only 6 losses, 2 of which carry the charity point as they occurred in extra time. That's fewest losses league-wide. As a Wings fan, there ain't much to bitch about right now.

There's a few points that we'd like to see improve from our beloved team. It'd be nice to know that we can maintain this pace while giving Super Jimmah some rest now and again so that he's not all tuckered out by the time the playoffs roll around. At times our defense seems a bit too confident in Jimmah's ability to stop pucks and lets too many shots from the slot. Brett Lebda keeps fucking up, totally underperforming and coughing up ridiculous turnovers in the neutral zone.

All these things aren't really that concerning in the end. They'll be worked on and we can have utter faith in the best coach in the business to make them happen. There is one issue that's causing some consternation, however. I'll give you a hint:


So far Happy Hudler has 6 whole points this season. That's right, he's on an absolutely scorching 22 point pace. Hey, that means we're only paying the little bastard $130,681 for every point he manages to notch on the scoresheet. What a deal!

Happy's the type of player that tends to go on streaks as it is. So, hey, maybe there's some hope here that he's not going to Leino us in the assholes for the rest of the year. There's still a shot the little bastard can turn it around and stop being a giant piece of shit. So far, Babs has tried a lot to get that to happen. He's played with the lines, trying to spark something inside his bruised Czech psyche. He's given the guy power play time. He's put him in the press box. So far, nothing has really sparked his game.

Time to get creative.

And thus was born:

About 10 minutes into the first period yesterday in the beatdown of the Sharks, the San Jose announcers gave us an interesting stat. At that point, the Red Wings were up 2-1, but were being outshot 15-4.

In related news, streets in San Jose are paved with gumdrops and everyone rides unicorns to get to the free-hooker store.

The point being, the stat guys at HP Pavilion Arena are - to put it lightly - fucking high as a kite. There's just no way at that point that the Sharks had put that many shots on goal. But hey, why not use this to our advantage?

Babs has worked hard to try and motivate Happy and he appears to be pretty seriously snake-bitten. Well, why not inflate his litte ego a bit, alleviating some of that mental stress? Hire the San Jose statisticians to watch Jiri's game. At the very least, it will make us fans feel a bit better about the turdburger he leaves on the ice every game. Sure... Jiri didn't score... or get an assist... and had 4 turnovers... but hey, he had 98 shots on goal and 146 hits! That's a helluva start.

I'm a firm believer that just about any problem in the world can be solved with either a) Booze, or b) Duct Tape. Considering we've witnessed what the former does to Mr. Hudler... 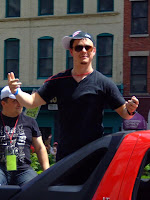 ...it's probably better that we work with the latter.

Now, look. I'm not a scientist. I don't have an advanced degree in engineering and I'm not intimately aware of the complex physics involved in the various aspects of the sport. So I'm not here to say how duct tape is going to fix Happy's game. I'm just saying that it definitely will. I'll leave the implementation to the big-wigs and experts. Maybe they'll duct tape a rabid wolverine to Happy's ass causing him to skate with a bit more hustle and urgency. Maybe they'll duct tape Happy to Datsyuk, or Zetterberg, or Cleary so that he'll have to follow them around all day, learning what it's like to not be a fuckwad. Or perhaps they'll just use it to seal up his sphincter so he'll stop shitting all over the ice. I don't know how it'll work - I just know that it absolutely will.

Lets recall the case of Ville Leino. I know... it hurts. It brings up a lot of bottled up rage from watching that floating pile of wet dong take up a roster space all year. However, as soon as we dealt him away for table scraps, he decided to remember that he was an NHL player and he started scoring at a pretty decent pace. After he was traded and hit the playoffs with the Flyers, Ville racked up 21 points in 19 playoff games. This year, he's got 19 points in 25 games for the Flyers. Considering he had just 11 points in 55 games last year - that's a pretty dramatic improvement.

So lets set something up with our pals in Philly. We'll trade Jiri to the city of brotherly love until he decides to start scoring at some absurd pace, and then they'll trade him right back. What's in it for Philly, you ask? Well they get to help out the best franchise in sports! I'm sure they'll agree with that fact and be plenty happy just lending us a helping hand. Then, when all is said and done, we can go back to fucking hating Daniel Carcillo and the rest of his band of goony fuckwads.

Jiri wasn't always a stack of smegma. In fact, just last year he put up 54 points in as many games with Dynamo Moscow of the KHL. I'm not mathematician, but I'm pretty sure that's a point-per-game pace. If only we could get Happy back to that place.

Now there are many variables that go into a player's successes and failures. So lets make sure we cover every base we can. First, we have to let Happy know that the Wings full staff of trainers and highly qualified medical professionals will no longer be available to him. Instead, if he ends up injured we'll just have some guy named Ivan come rub dirt on it. If that doesn't work, he'll be dragged off the rink and shot. Also, we'll be sure to hire a group of pale, depressed, alcoholics to surround him at all times. He'll only be allowed to hang out in a frozen uninhabitable hellscape. We'll take 1/3 of the parts out of his car, and make him eat nothing but borscht. That's what those people eat, right? Also, I think there's dragons there or something. So lets get some of those.


This one's simple. As a last ditch resort, every time Jiri finishes a shift without scoring, we have Paul MacLean punch him in the dick. I pick MacLean solely because of his moustache. A moustache like that says some things about a person. It says they have a strong affinity for bacon and other smoked meats. It says they can fell mighty trees with no more than two swings of a dull axe. It says they have dogs, but they aren't allowed on the couch. It also indicates that the wearer of such a 'stache is probably an outstanding dick-puncher.

We all know how much Happy likes to use his dick. His track record of consorting with nefarious women and filthy Czech whores is well documented. Perhaps if his equipment were in constant danger he'd do more than just stand around with it in his hand.

We can only hope.

Turn it around Happy... or you're going to have a new nickname. "Bruised and Swollen Love-Pump Hudler" just doesn't have the same ring to it.
Posted by CaptNorris5 at 2:30 PM

That was the funniest shit I've read all day! Also, as an idea, threaten to take away all of Hudlers whores, and tell him he can get one back every time he scores. I bet that'll have him lighting the lamp in no time!

Decent fifth grade writing. Figure out the difference between losing and loosing.

Clearly didn't read the disclaimer. Immaturity permeates every aspect of this blog. It's not limited only to dick jokes and expletives - spelling and grammar are also victims.

Thanks for the feedback, though. I'll be sure to go slap my knuckles with a ruler for you and say 40 Hail Marys.

That's latin for "piss off" right?

As for #2...how about this? You have my permission to use as you see fit. It's my photochop.

Friggin' amazing. Lost my shit when I looked at that image.