Look, absurd rhetoric and manipulative imagery are all well and good. They're the true building blocks to any successful campaign. But if you're really serious about winning... you've gotta crunch the numbers.

Before us stands one of the more important showdowns in the history of man. As such, taking this lightly would be a mistake. A serious mistake. Like, paying-Brett-Lebda-$1.5 million serious.

We've all seen the 24-hour news channels during election cycles. They've all got their fancy screens and their high-paid analysts, and their Wolf Blitzers. All of this has a reason beyond annoying the piss out of everyone. These devices are employed to predict the outcomes of these really not that important elections.

So why the hell wouldn't we do the same with something that actually matters? 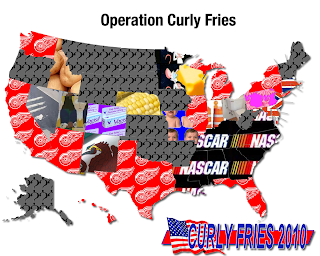 Sure, this map is a bit more complicated than the standard Red and Blue maps that you might see out of CNN. Some would say those maps are much easier to read and are therefore drastically more useful. I say CNN is a bunch of pussies. We're Wings fans. We do this shit right.

But, I'm sure even the greatest fanbase of the greatest franchise in history probably needs a legend to go along with this scientific thunderfuck of a game-changing prediction machine. Here it is:

These states are all represented by question marks. You might think that this means that their allegiance to either Curly Fries of Jr. Roast Beef is undetermined. You would be wrong as Brian Burke when he signed Brett Lebda to a $1.5 million contract.

There's no way I'm gonna put together a map of this magnitude and not come to a determination within a precise degree of scientific certainty for every state on the map. These states are only marked with question marks because I'm pretty sure nobody actually lives there.

I mean really... New Hampshire? That doesn't even sound real. I haven't even heard of an Old Hampshire so where the hell does this state get off? And really, have you ever met anyone who said they were from South Dakota? Even if you have, I bet you had a sneaking feeling that they were fucking liars. I'm confident that these states are just highways and empty space. Therefore, no need deciding their allegiance to happiness and joy or Roast Beef.
Idaho, for obvious reasons, is indicated by potatoes. These people fucking love potatoes. Their economy runs on the stuff and most residents actually have altars made of hash browns in their homes. Now, I'm no Iron Chef, but I'm pretty sure one of the ingredients in curly fries is potatoes.

Determining the allegiance in this state is pretty easy. What are these tuber-worshiping potato maniacs more likely to choose? Roast Beef, a decidedly non-tuberous dish? I think not. Hell, if America's Roast Beef Yes Sir stops giving away these delicious treats, Idaho's potato-driven economy is in danger of complete collapse. Chalk this state up as a win for America.
Like Idaho, Nebraska has a one-dimensional vegetable-based economy. Also, I'm pretty sure potatoes and corn are pretty much the same thing. Therefore, the above reasoning fits here, and we're calling this a win.
Again, this is food based. Wisconsinians... err, Wisconsinites... uh, Wisconese??  Fucking people from Wisconsin are all about cheese. This one is going in our favor. You see, this choice is between Curly Fries, and a Jr. Roast Beef sandwich. Not a Jr. Roast Beef n' Cheddar sandwich. These people should turn out in hordes to vote for curly fries after America's Roast Beef Yes Sir snubbed their holy cheese gods.
Don't worry about it, these people are WAY too high on cocaine to vote.
Represented here by South Park's rendering of Joseph Smith, Utah is overwhelmingly dominated by the Mormon vote. This is where the family values aspect of our campaign will come in handy. Actually, who the hell are we kidding? There's no way our group of degenerates and come across as the wholesome choice in this election. I'm afraid that this one is going to be lost to the Mormons. Dum dum dum dum dum.
I'm not convinced this is state actually has the right to vote. I'll provide an analysis when they decide to join the union.
Oh right, like these inbreds are going to take time away from watching NASCAR and beating their wives to get on them newfangled interweb machines to vote.
Still England.
Ohio... is terrible.
So is Indiana. Crossroads of America, eh? Even their state motto admits it's just the place people go to get somewhere else. Who gives a shit about how these two hellholes vote?
These aren't going well for us... This is what political scientists refer to as the "spite vote." It refers to a phenomenon wherein an electorate has been so humiliated for so long that they're now completely empty inside - devoid of all value as human beings.

Each of these states are represented on this map by different images (Vagisil for Dive fans, a sobbing little bitch of a baby for the Bitter Bitch Blues fans, Pinky for Minnesota, and pink Tu-Tu's for Thid Rosby's state of Pennsylvania). However, they'll all probably vote Roast Beef for the same reason - they've been picked on by the vastly superior Red Wings for long enough that they're dead inside. No worries, you win some, you lose some.
Speaking of win some. These are going Curly Fry. Why? Well, remember when I said the guys at TPL get shit done?


Each of these states contains a member of the trifecta. You think they're going to let this shit go to the Roast Beef? I think not.
The Chief from over at A2Y is currently on a ship with a bunch of weapons in the Pacific. If for no other reason, these fuckers are voting Curly Fries out of fear. A well justified fear.
We've all seen the Wings play in Phoenix and the California markets. Hell, just last night they faced off against the Ducks and perennial World's Douchiest Bag winner Corey Perry. The chants for the Wings drowned out the California crowd. That's because if you're a hockey fan, and you live in these states... you're not from there. These markets are full of transplanted Wings fans, and they'll deliver the vote for Curly Fries.
Two words: The Captain.
They may be begrudging, but these fuckers are voting curly fries if I have to climb in their windows and snatch all their peoples up myself.
And this, this is where the science is. You see, it really doesn't matter how all these other states cast their ballots. When it comes down to it, theres only one state that counts. Motor City, Motown, the D. Hockeytown is going to come out in spades for Curly Fries because they're good people. The region is full of dedicated hockey fanatics who - unlike the little bitches in Denver, or the bandwagoners in Chicago - know the value of a storied tradition. Hearing Mickey shout "Curly Fries!" is an integral aspect of the Red Wing experience. Like Budd Lynch's calming voice over the intercom, hearing Stompin' Tom Connors after a Wings victory, pissing in a trough, shoulder-to-shoulder with grown ass drunk men - Curly Fries just come with the territory. There's no way the blue collar heroes from the Motor City are going to let us down.

Curly Fries will return. They'll be here to stay. And, you know, if they don't we get to riot and fill the streets with the blood of the plutocrats. So that's pretty cool too.