Get the Vote Out: Seriously P. Diddy Puff Dogg will mess you UP

So, I'm not sure if you are aware of this or not, but the guys at The Production Line get shit done.

They're movers. Shakers. Emperors among minions. When they speak, people listen. When they shout, people cower. They're remarkably above average in both length and girth.

They're some swell fellas.

I'm not just saying this because they were so kind this week on TP:60. No, the guys over at TPL have launched a campaign recently to right a wrong. You see, many people with the power and influence that these true American Heros have would use it for their own benefit. Not TPL. They've unleashed a groundswell of support from Red Wings fans to correct an injustice. An unyielding sea of principled revolutionaries demanding that their voices be heard. Rising as one, with a clear message, unwavering and proud:

That's right. Recently, America's Roast Beef Yes Sir made the tragically un-American decision to no longer offer the storied Curly Fry after a Red Wings hat trick. Rather, the restaurant decided to offer the Jr. Roast Beef sandwich in its stead.

Luckily, we've got the guys at TPL to lead the charge to right this wrong. Recognizing that the free curly fry stands for all that is Red Wings Hockey, they've taken the flag and charged full speed ahead. Lo and behold, their efforts have been rewarded.

After getting some serious press, the movement has been successful in convincing America's Roast Beef Yes Sir to consider a return to justice. A poll has been posted at Fox Sports Detroit's website, wherein fans are encouraged to vote for their preference - freedom, truth and justice, or some soggy roast beef.

Now, apparently, there are some people out there who aren't as convinced. Well, let the politicking begin.

Elections are as much a part of the fabric of our history as apple pie and smut. In fact, we've just been through a relatively harrowing election season here in the States, where we were constantly bombarded by ad after ad, pimping various candidates for office. This election is no less important, so why shouldn't it get similar treatment? 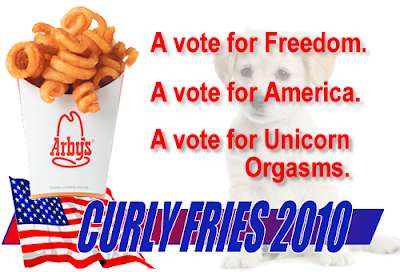 ...are all things I would print this on if there were time between now and the 10th, when voting ends.

This is a classic election campaign sign. It appeals to all of the great motivating values in our society. Also, if you really look closely, it's subliminal. I bet you didn't notice that adorable little puppy back there, subliminally tugging on the cockles of your heart and manipulating your every thought and emotion.

But this is 'Merica. Everyone knows you can't win on a stong positive message alone. If you want to win an election in 21st century 'Merica, you gotsta go negative. 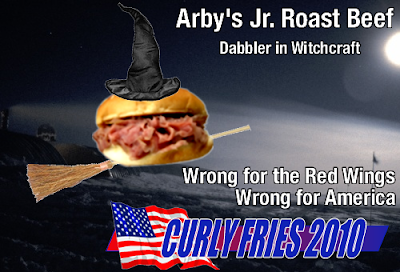 Turns out that for the most part, people really dislike things that they think would make Jesus sad. Generally included in that group of things are the dark arts. This ad simply points out the OBVIOUS correlation between roast beef and a Satanic devotion to Witchcraft. I'm sure I don't need to point it out to you how obviously related the two are. Only someone who hates 'Merica would have a hard time seeing it.

But you know, this type of campaign is new to the political scene. While it's had some success, it's not usually a great idea to put all your eggs in one basket.

Which brings me to a really solid question that should blow your minds. Where is roast beef even from?

I've done extensive research on this issue. That is, I've taken a few moments to peruse the Wikipedia page on roast beef. And you know what I found there? 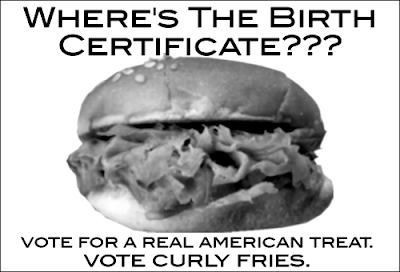 Until Arby's Jr. Roast Beef sandwich can definitively come forth and prove, once and for all, that it was not first conceived of in Kenya, I think it's pretty safe to assume - nay, conclude - that Kenya is it's birthplace. Can you really cast a vote for a Kenyan sandwich over curly fries that taste like freedom?

This is a matter of utter importance. As a result, we cannot take this election lightly. We must pull out all the stops and leave it all on the campaign trail. We cannot look back and think "if only." So, in that spirit, it's time to go nuclear. 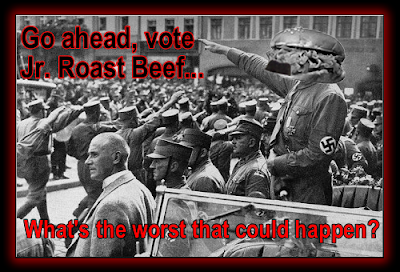 That right there, my friends, is the right bauer of political ads.

Now get your ass out there and vote.
Posted by CaptNorris5 at 2:17 AM

Immediately posted on tumblr. Tell everyone, get the word out there or suffer the wrath of your Meat Curtain Overlords.

The Hitler one had my cracking up in bed last night for a good 5 minutes. Well played sir.

Like Hollis, I was in bed when reading this for the first time -- CERTAIN that I was going to wake my wife when I saw "Unicorn Orgasms." I absolutely lost my mind.