Appropriate: Congrats to the Wizard


You know whats even more awesome?

Seriously. Other than the Joe, the Av's home ice is the best damn place for this little bit of Red Wings history to be cemented. Some of the best hockey the Great and Powerful Wizard of Oz has ever been a part of occurred against that team, on that ice. Where better for Ozzie to again show the world that he's a gamer?

From what I understand, Ozzie stood on his head and earned that win for the team. I say it this way because I was in a position where I wasn't able to actually watch the game. Again, completely fitting. I got to listen to the glory on a scratchy radio, with the soothing sounds of Ken Kal shouting out the action occurring on the ice. Just like old days, where because of the late starts against the Quebec Nordique's II: The Reckoning, I was relegated to listening to the ends of games in my room while I was supposed to be asleep. Hearing Ozzie's 400th (hall of fame) cemented in the same way I took in many of those wins back in the days of The Rivalry seemed all too fitting.


The Winged Wheel's List of Shit that 400 Means for The Wizard
Ozzie, good on ya. You deserve it. Good news for the Wings too, as so far this season, Ozzie's had more good starts than he's had lousy ones. Keep it up Oz, 4 more to make Grant Fuhr your eternal bitch.


And for the haters? 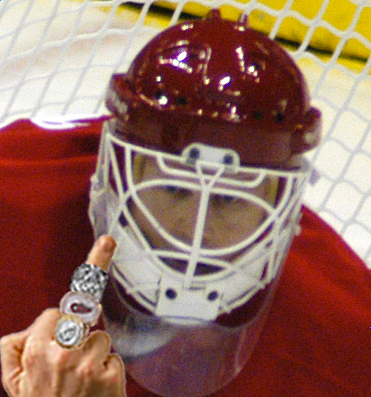