Spoiling The Party: Don't worry, maybe you'll get another shot in 50 years

It's amazing the Blackhawks still can't manage to make a buck, and are solidly in the red as an organization. Because really, they know how to fire up a crowd with an explosive, exciting, and exhilarating party. For their Banner Raising ceremony last night, they followed a classic formula:

And boy howdy did they deliver.

Based on their selection, I figure they spent a long time struggling between the song they chose, and that shitty Celine Dion song from Titanic. I have to say, though. "With or Without You" was particularly fitting. As in, "sorry 80% of our Stanely Cup winning roster, but we've gotta raise this banner With, or Without You. Well, I guess just without you. Enjoy sunny GA."

Now folks, it wasn't just the absolute fucking monotony of it that made it tough to watch. The Hawks have been division rivals for years. A fellow member of the class of 1926, the Wings and Hawks have been clashing for over eight decades. Throughout that time, the Wings have pretty much always had the upper hand. And though that really hasn't changed, those bastards adorning the absurdly racist characature took what is rightfully ours. They managed to squeak out their first championship in 49 years.

And we had to watch them solidify it. We were there, as they placed that banner in the rafters of the United Center, along with many, many others. Of course, those other banners almost all belonged to the Bulls, but still. It was tough to watch.

Folks, I'm not one to subject you to horrific imagery. Some blogs may attempt to get press by showing shocking images of grotesque and terrifying scenes. Not me. I like to protect your precious eyes from such abominations. Example?

The last thing I'd want to show you is some mutton chopped son of a bitch undeservedly adorning The Captain's storied 19 lifting our Chalice. So, instead, you'd get an image like this: 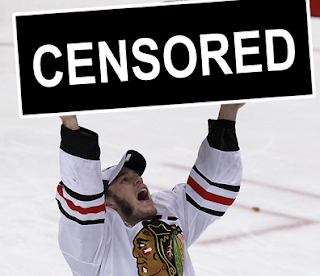 I know, some of you may find that this is still too close. This image still leaves you to imagine what could be behind that censored bar like a fourteen year old discovering himself while watching Girls Gone Wild infomercials at 1 in the morning in his parent's basement. So, there's a solution for that too: 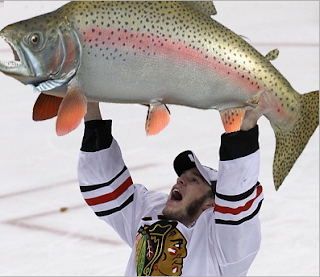 See? That's not dangerous. The imagination isn't going to fill in something traumatic because of the excellent backstory. In the previous picture, you're likely to think, "hey wait a tick, he sure seems happy, and he's holding something over his head on some ice! I think I know what's going on here... and I don't much like it. I don't much like it at all." Well, here, you avoid those old timey thoughts. Sure he's happy... look at the size of that fish!

Would you care to see another photo that will make you happy? 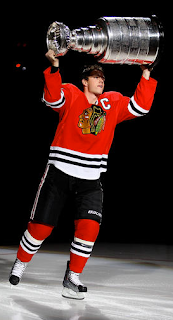 Whoa! An ambush? Not cool.

No. In fact, quite the opposite. This picture here should warm the cockles of your heart. While you should cringe when seeing the uncensored version of the pictures above, when you gaze upon this beauty each and every cockle you have should be toasty as shit.

It's all about timing.

Those pictures above? They came from last June, after the blind dog managed to find a bone. It's a tough thing to see, and even tougher to process. But that last picture? That came last night.

That's right. What you see right there is a captain, hoisting the Stanley Cup, during the 2010-11 season. And he can't even hide behind the idea that it was the first game of their season, so technically the cup was theirs 'till puck drop. Because as I'm sure you're aware, after last night's show, the Hawks are 0-1-1 - meaning at the time Johnny "Fingers And" Toews lifted that storied trophy above his head it wasn't his.

If that's not a clear way to piss off the Hockey Gods, I don't know what is.

Just based on their management, the Hawks were already doomed to go another 49 years without another Cup. Now? Holy shit who knows. All I know is that, as we've clearly experienced, those Hockey Gods are some temperamental bitches. Their wrath does not come easy, and they are neither merciful, nor kind.

Let it rain down upon Chicago. Let it fucking pour.

Way to ruin the party last night boys. Enjoy it - soak it up. You only get to laugh at Turco 5 more times this season.