Off to the Races: And that's how you start a season


Or how about how you feel after breaking a long fast, taking that first bite into a delicious meal?

Or when you've been really jonesing for some blow, and you just shove your face right in a pile of sweet columbian bam-bam?
And that, my friends, was a game. There's a lot of really good things to take away from last night. Examples? 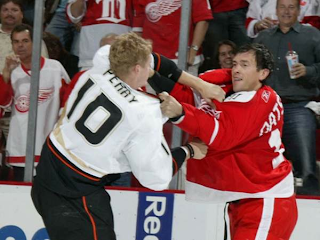 Look at this silly bitch smile. Not pictured: me pissing myself.

But really? The best part of last night? Taking down the fucking Ducks. You know, somehow they're a team that allows me to forget how much I hate them in between match ups. I'm not really sure exactly how. Perhaps its because in the last couple of seasons, they haven't bothered to win anything. That usually takes the sting out of most rivalries.

But really? Fuck the Ducks. Right in their shiny purple Disney asses. Hard.

They showed their true colors last night. No, not the disgusting teal and yellow inspired by a shitty children's movie. I'm talking about the douchebag variety. As soon as things started going downhill for them (puck drop), they decided it was time to goon it up. After every delayed penalty, without fail, the entire roster of shitty human beings would start their little sideshow. Their "captain" spent the whole night trying to lure Homer into a fight. They displayed zero self control, zero discipline, and zero class.

So that was fun. But now the fun is over, and it's time to ruin a little ceremony. A ceremony that comes to Chicago only once every 50 years. A ceremony that isn't going to happen again any time soon. As the Hawks raise their pathetic fourth banner in 84 years, the Wings will chuckle. Our vets will look to the rafters at the United Center, see all four banners, and then laugh at the idea that they have as many rings as Red Wings as the Hawks franchise has in history. Then the puck will drop.

Time to spoil a party for some Bandwagoners. 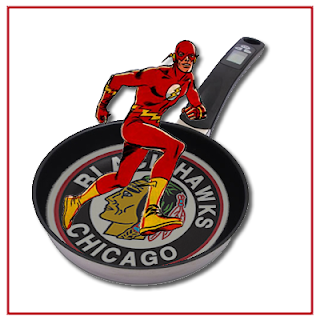