Chicago: (Where the wind) Blows Hard

But this was too good to pass up.

First, a hearty stick tap to the Wings. 5 wins, one charity point, and one regulation loss. That's a far cry from our start to the 2009-2010 season. Sure, so far our play has been far from perfect. We still need to get that third line to show up and start clicking, and we've had some defensive problems COUGHdougjanikCOUGH. But you know... I'm gonna go ahead and take that as a good thing.

The fact is, we're near the top of the league in points earned so far, and we've got plenty of room for improvement. On top of that, we've got the best coach in the game; a guy who has proven he has the ability to make that improvement happen. He's not working alone, either. He's got two good friends: talent, and depth.

It sure would be tough to back a team that didn't have all that awesome-sauce going for them.


Oh yes. Sure, Chicago has managed to put together the same 11 points the Wings have in the standings. Of course, they did so with an extra three games. And the best part, is that,  unlike the Wings, they've been pretty much performing as good or better than you could reasonably expect. Hossa and Sharp have been on FIRE. That's not the kind of thing that will generally last an entire season. Also - and bear in mind, this is all hearsay - apparently, Marty Turco made a couple of saves over the past 10 games. That's not standard, and isn't likely to keep up.

Now, I didn't come out of hiding under a pile of responsibility to point out that the Hawks have had a mediocre start. That's not a surprise. No, I'm here today because the Winged Wheel has obtained another beautiful piece of information to throw on the giant pile of suck that is the Chicago Blackhawks franchise. And this time, unlike so many times in the past, this is all legit. No fabrication or photoshop necessary.

Guess who's a Blackhawks fan? 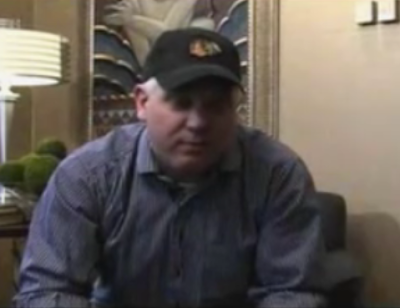 Now look, this isn't a political blog. I - much like the above pictured stack of rancid smegma - have no interest in talking about anything of substance. I'm not here to talk policy, philosophy, or the relative worth of melting down your jewelry and investing in underground bunkers. But really, whatever your politics, I have a firm longstanding belief that the amount of analogies about Nazis you make is inversely proportional to your worth as a human being.


Now, I should be fair. While compelling, this is not conclusive proof that the antichrist is a Blackhawks fan. The above picture comes from an advertisement in which Glenn Beck talks about the impending apocalypse - surely brought about by black, gay muslims. Perhaps he's sporting his Hawks hat as a fitting metaphoric reminder of what happens when something is so poorly managed that it collapses in on itself, bringing it to such a state of catastrophe that it can never return to normal. Perhaps Mr. Beck decided that his "Rome is Burning" message is better punctuated with a reminder of a complete and utter apocalyptic collapse.

Or perhaps Glenn just wants us all to know that when he wants to relax on a Saturday night after a long day of drowning puppies and punching nuns for being poor, he kicks back with an ice cold goblet of dolphin blood and watches a true American hero from Buffalo take the ice.


Either way - Fuck Chicago. Fuck them in their shiny purple asses.

P.S. I promise I'll get back to writing about the Wings soon... these damn breaks between games are making it rather tough to invent compelling storylines for which I can photoshop juvenile images and gratuitously spew the fuck word.