You know, the summer is a real pain in the ass. Granted, overall I'm a fan of much of the weather. And hell, you won't hear a complaint from me about a lighter law school schedule. But really, what the hell am I supposed to do without hockey? It's usually around this time of year that October starts to feel reeeeeeeeaaaaaallllly far away. We're just far enough away from the end of the season that it feels like forever since I've last watched a game. We're also far enough past the Draft and the start of Free Agency that we don't have shit to look forward to except for training camp.

This is the part of the post where I'd say something like "Well... thank Bear Jesus for Baseball." Yeah, that's probably not going to happen here. Mostly because Larry Aurie decided that his vendetta against Mike Illitch needs to extend beyond just attacking the Wings' roster. Now, the Toledo Mudhens are taking the field at Comerica and the sports world continues to be a miserable, torturous, gut-wrenching hellscape with no sign of salvation in sight. Hooray. Hooray indeed.

That being said, it's not like things worth commenting upon just haven't happened in the hockey world since I last took up valuable bandwidth with inappropriate drivel. So, why not, here's what we missed.

Boy, I'm sure the internet just didn't know what to do with its collective self without my comments on such dynamite player movements like Jody Shelly to the Flyers, or Jonathan Matsumoto to the Hurricanes. Thrilling. Though, there were a few gems.  Like Glen "Holy Fuck I Can't Be Fired No Matter How Hard I Try" Sather signing Derek Boogard to a 6.6 milliohahahahHAHAHAHAHA. Ahem. $6.6 million contraHAHA. One more try.

Speaking of refuckulous contracts:
That's right folks. One of our favorite whipping boys here at The Winged Wheel will be turning pucks over and getting caught jumping the rush for the Toronto Maple Leafs. Not only that, but he'll be paid almost $1.5 million dollars a year to do it. At the time, there were lots of "experts" that called this a great move, indicating two things. 1) Apparently it doesn't matter if your most recent "playoff experience" includes envying Chris Osgood's responsibilities manning the faceoff chart, and 2) "Experts" are fucking idiots.

The key here: that shitbird is no longer a Wing. That's something we can all be happy about.
Oh yeah. No way I'm going to stop adding laughter to words, no matter how old and tired it gets.

Anyway, there are a lot of questions surrounding the Chicago Blackhawks. How will they manage their salary cap and still have the minimum number of players to take the ice? Will they be able to afford the 16 billion dollars Anti Niemi gets awarded in arbitration? Will it be as funny in 2058 that they'll still be advertising "2010 Stanley Cup Champions" on their playoff tickets as it was in 2009 when they were advertising their 1961 win?

Can someone please pass the fork? They're done.

They've lost players left and right. Then there was that whole hillarious Hjmarladhdadqqqlbntson (sp?) situation, where San Jose offered the guy a contract with a hit of over $4 million dollars, forcing the cash strapped Blackhawks to let their promising defenseman go...

Oh wait. Nope. Just as it looked as maybe (MAYBE) the Hawks would be able to peice together a team without loosing every single ounce of their core, they matched it. Hillarious.

That means the Hawks currently have -400,000 to sign at least a forward, a defenseman, and Anti Niemi. Hey, maybe someone will take one for the team and pay to play.

I cannot wait for 24 September.

No reason to insert laughter into this one because it's damn tragic. In fact, this deserves much more than a blurb on a "Fuck me, I haven't updated in a while" post. But the sad fact is that for the moment, this will have to do.

Personally, my exposure to Probert the Wing was limited to a few years. Though I distinctly recall some of my first hockey memories being excited about one of the bruise brothers dropping the gloves. Maybe the fact that some of my first hockey fights included one of the best to ever throw down helped shaped my whole-hearted belief that fighting is not only good for the game, its downright key.

Add the fact that Probie spent his best years protecting the Greatest Captain to Ever Play the Game. That in itself earns the man a seat of honor in the litany of Wings Greats. 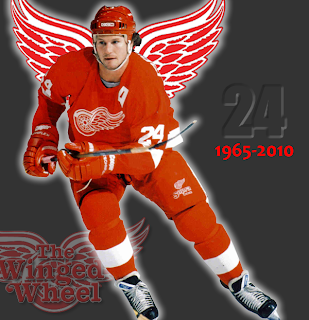 Probie, you went too early. But now that you've joined the Legion, can you do us a favor? You've taken blows for the Wings before, and we're asking you to help out again. Keep an eye out for any of those coke-riddled Hockey Gods that decided to shit all over us last season, and when you see 'em? Do what you do best.

That's not everything, but I'll throw in my two cents about some of the other issues in another post. Baby steps.