Blame Game Update: To the victors, the spoils.

This is a landmark in Red Wings history.

This is epic; the post that signifies the end of a journey wrought with painstaking determination, intense struggles, and constant battle. 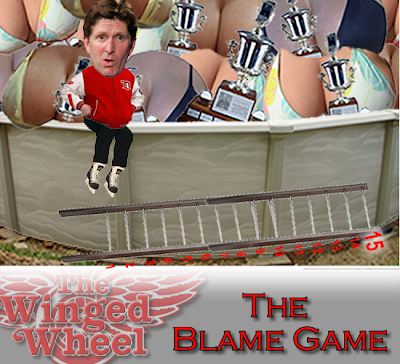 That's right. As far as the Winged Wheel is concerned, the Blame Game is over. I made the promise when I started this little ditty, that if Babs were to reach that summit of 95 points by the end of the season, then to him I would award the glory. To him, I would bequeath the spoils. To him, I'd offer an above ground pool full of fake tits and Jack Adams trophies.

And he's reached it. At the time that this whole shindig got underway, we were looking at an uphill battle. In order to reach the summit of the mythical 95 points, the Wings would have to take 15 games of the remaining 23. They'd have to suddenly go from a team that struggled to go .500 to a team that could go no less than .650. And that, my friends, seemed like a long shot.

Not for Babs. Dude righted the ship just in time and now, we're staring at five remaining games and a magic number of three. This afternoon, the puck will drop and we'll be playing for the 5 spot. Not trying to squeak in, but a straight up respectable 5th place. Considering how Larry Aurie bent us over and didn't even bother to lube up for the entire season - that's pretty fucking impressive.

Lesser men, when faced with the temptation of a refreshing dip in the Above Ground Pool of Glory would cave. They'd tear off their clothes and jump right in for a skinny dip, taking what is rightfully theirs.
No, ladies and gentlemen. If you notice, Babs is sitting, waiting on the edge of Ol' Glory herself. He knows it's not over. He's not willing to settle for 95 points. Dude wants to run the table.

Babcock is not just gunning for the playoffs anymore. He's taken aim at the Central title and he's charging full speed ahead. Now, considering the chickenhawks have won their last two, in order for that to happen they'd have to lose out and the Wings would have to win out. Improbable, but stranger things have happened. Babcock doesn't give a shit how improbable the goal may be. He's decided that this Wings team is one that wins.

And so he waits. He waits to take his prize because now - he is focused. He's steaming into the playoffs, ready to thunderfuck anyone who gets in his team's way. He's eying the Preds, likely confused as to how such a team could still be ahead of the Dynastic Red Wings. He wants to fix that little injustice.

And Bear Jesus willing - he shall.