H2H Distilled: Then aged, bottled, shipped, and consumed by some crazy fanatics and a dude from Brazil.

Ok. So I lacked the ability in the previous post here to string together the right sequence of words to recap the amazingness that was Herm to Hockeytown. Guess what? I still do. It was just too epic. However, I'd be remiss to fail to at least point you folks in the direction of those much more talented than yours truly, who have managed to put together some great recaps. In that light, click the following links for your reading pleasure:
I was going to put together links of all the fantastic reviews out there, but it turns out two things stand in my way: 1) Petrella beat me to it; and 2) I'm lazy as shit. So go to the second link there and go through all of recaps. Seriously, everyone did a great job summing everything up.

As for me, I'm going to have to resort to bullet points. First, some of the amazing highlights:
Of course, it wouldn't be The Winged Wheel if I didn't bitch about something. Therefore, the regrets:
Overall, it as a hell of a time and it was for a great cause. In addition to the cash raised to bring Herm all the way from Brazil, the Greatest Fans in the Universe raised over $5,000 for the Children's Hospital.

Oh. One last thing. A core group of superhumans came together to truly make this happen. And for that... I think they deserve a nice refreshing swim. 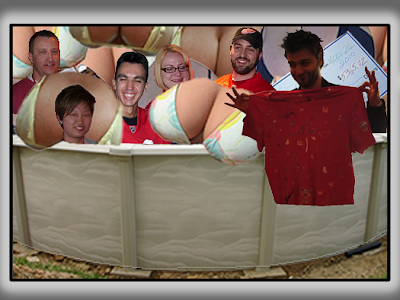 Serven, Ellen, Jen, Hollis, Patrella (shirtuzzi and all), and of course, Herm - Enjoy the Swim in the Above Ground Pool of Glory. You've earned it.
Posted by CaptNorris5 at 5:41 PM

That totally looks like the pools I regularly hang out in.

That picture is full of WIN. Freaking Awesome dude.

Real nice getting to meet you there. I'll have to swing through Chicago and we can actually hang out for more than 15 minutes.

Hollis, Chicago for sure. I'll have a cold brew with your name on it waiting. Though, that whole "chemical dependency" thing I've got going on may call dibs.

Excellent recap. That's one hell of a reward for the organizers.

You were the first person I ended up talking to, pre-nametag. Glad to meet ya and looking forward to seeing you and the rest of the gang at the next one.

Nate, great meeting you too. I'm way looking forward to H2H2 and I plan on not missing anything next time.