Blame Game Update: Just in time, a hearty about face. 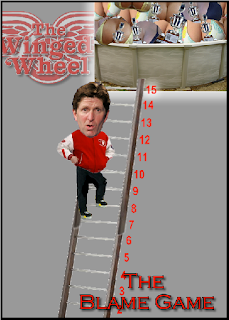 He's getting closer. Can you start to smell the glory? Oh, and those tits are probably starting to get a little rank. Nobody's cleaned that pool in a while.

There's another big game coming up Friday. How do I know it's a big game? Well, I use a very complex formula. You can try this at home if you like. First, you'll need three sharpened #2 pencils, some pipe cleaners, one gallon of gerain alcohol, a beaker, a live rat, and the knowledge that:
Now, drink all of the grain alcohol and throw the rest of that shit off your roof. The fact is, every game from here on out is basically a must-win. Hell, the rest of the fucking league doesn't seem to want to do their jobs and beat Calgary and Nashville, so we're going to have to do it for them.

The game tomorrow is against a year-long cellar dweller. This is a team that is, and has been, sub-par. They've been plagued with injuries - the only team who's been hit harder than the Wings. Hell, they're a solid 11 points behind the 29th spot in the league.
It's games like these - the should wins - that often give us trouble.  If there's one issue that plagues the Wings more than any other, its that when they've got the enemy down, they have a tough time putting their skates on their throats, and stomping down hard. Think of all of the blown leads - where we SHOULD have won the game, but dropped the ball in the third. Think of all of the times where the Wings SHOULD have been able to bring their A game - hall of fame induction weekend, anyone? Think of all the times the Wings have let inferior opponents bend them over and Pulp Fiction them to death. Hey guys:
Heck, if not for your shot at a 19 year playoff streak, do it to keep Dana from looking stupid. Ok, ok. I know, a hockey game can only do so much. You aren't brain surgeons.

Finally, my apologies for the infrequency of posts lately. It's my spring break so I haven't had the opportunity to be forced to sit in a room and ignore the important things being said that will have a dramatic impact on my future. Further, I regret to inform you that it will not be getting much better anytime soon, as I'll be spending the weekend in the beautiful Clark County Detention Center. Yep, I'm off to a den of sin where various chemical and psychological dependencies are not only tolerated, but they're factored right into the GDP. Off to the adult Chuck E. Cheese, where playing in the ball pit has a whole different meaning. Off to the place where there is no such thing as a "bad decision" or "immature act."

Hopefully between now and the time I get back, J-Rock can pick up some of the slack. Hell, maybe jail has Wi-Fi and I'll have the good fortune of being able to upload some beautiful blame game update pictures. Hopefully by then, Babs will be two-rungs up that ladder to glory, inching ever closer to destiny.

Make it happen boys, the dynasty is on the line.
Posted by CaptNorris5 at 11:10 AM