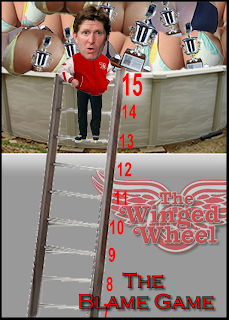 Can you feel the excitement? Babs can. He's peeking over the top of that glorious above ground pool of glory, and he can basically smell the prizes. Two more wins for the projected number, but fuck that. 5 more wins for another 100+ point season.

Oh. So I'm supposed to write a post now? I'm supposed to some how sum up the last two games, one of which involved an epic convergence of some of the most amazing hockey fans to ever roam the planet?
Needless to say, Herm to Hockeytown was amazing. I only regret that I didn't get to spend much more time there, or that I didn't get to meet literally everyone. However, those I met in person turn out to be just as much of badasses in person as they are online. I'm already counting down the days until we get to do this again. Hell, I've got to think annual just isn't enough.
Seems like a necessity to me.

Anyway, I'd post recaps, but many out there will do a much better job. I'll likely include a post with links at some point for those who are interested. But I'm not entirely sure that I have the ability to sum up something so epic using basic English. I'd need to start inventing words like "trumblefuck" or "shitschrum," and that seems like way too much effort.

As far as hockey goes? Fuck. Yes. You know, Friday I was a bit concerned. It was the 13 year anniversary of The Brawl. It was the date of the convergence of the 19 upon Hockeytown. It was Super Jimmah's birthday.
But fuck up they did not. I missed the first two goals waiting in the world's longest beer line, which was a bit of a disappointment. Until the Wings made me forget entirely about them by scoring 4 more. Then last night, I got in just in time to watch an epic shootout where Super Jimmah lived up to his name, stopping puck after puck. After last night's win, the wings are 8-1-1 in they're last ten. They've got a 5 game win streak going, and they are by far the hottest team in the league. Despite a shitshow of injuries (fuck you, Larry Aurie), and a clusterfuck of a season, the Wings currently sit in 6th. That's one hell of an improvement from whatever garbage we were looking at before the Olympic break.

But damnit, it feels good to not be in constant panic mode.
Posted by CaptNorris5 at 4:49 PM