Blame Game Update: 8 Spot be damned, I want the Central. 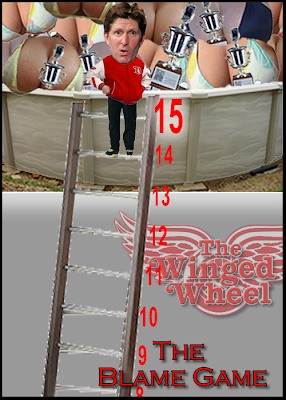 I knew Larry Aurie loved us at least a little bit. That Stuart goal sure seemed like it was off a high-stick to me, but we finally got a bit of good luck from the Hockey Gods and a call went our way. Not only that, but the goal won us the game. Last night, the Wings took their sixth straight win. This isn't really all that out of the ordinary for the Red Wings... usually. But this has been a bizarre-ass season. It's been one of those seasons where it became clear that in order to even make the playoffs, the Wings would have to go well over .500 for the remainder of the season. Not usually such a terrifying prospect, but we were all pretty damn frightened that it wouldn't happen. Well...
Over the last 10 games, the Wings have taken 19 out of 20 points. .950 works for me. And hell, it's got me thinking. And hoping. And praying to Bear Jesus and Winnie Cooper.

Watching the Blackhawks start to stutter makes me hope for what many, myself included, considered impossible about a third into this season: That the Detroit Red Wings will capture yet another Division Title.
Ok... it would be tough. Way tough. We currently sit 6 points behind the Hawks, who have a game in hand. There are only a few scenarios in which we can take back what is rightfully ours. To help, I've put together the following chart that shows the possibilities:

The last scenario on the chart is the only way in which we could enter a winnable tie with the chickenhawks. If we run the table, and they don't manage to win another game, but win 6 in overtime, we'll have the same number of points and same number of wins. That would bring us to the second tiebreaker, which comes down to the results of games between the two teams. Over the five games that we've endured these cheapshotting children so far, the Wings have earned 5 points to the Hawks' 6. Further, our sixth and final game against Chicago is the last game of the season. If the tiebreaker scenario turns out, we'd have to win in regulation to capture back our title. A win in OT would send us to the third tiebreaker, which we'd likely lose (unless we score a shitload of goals and let in very few between now and then).

Quick sidenote: Wow. That was way more research and thought than I've ever put into one of these posts. Apparently the Wings' recent success means I'm not so dead inside. I'm allowing myself to start to cross my fingers for more than just the 8 spot.

Yeah. I know. It's ambitious. Super ambitious. Pretty unlikely. Well, a little over a month ago, so was just making the playoffs. We're looking at a pissed off Red Wings team. A team that is sick to fucking death of being called too old, too depleted. The rest of the league took their liberties with this team for most of the season. We were laughed at, mocked. They pointed and declared that Goliath was dead. All the little Davids rejoiced, skipping and laughing, holding hands and frolicking in the meadows. Well, turns out this story is a bit different from the traditional tale of David and Goliath.

In the Bible, David hurls a rock at Goliath and kills him. Super. Makes you feel all warm and fuzzy, right? Well that's not how it works here. In this story, David hurled his little rocks. But at just about that time, Goliath tore his fucking ACL, dislocated his shoulder, busted his knee in the wrong-ass direction, got a severe concussion, and broke his leg in half. Goliath fell, and David rejoiced, taking credit for Goliath's troubles.

Then Goliath went to the DMC.

It's hard for a giant to rehab. Especially with so many injuries. But hey, he had a whole team working on him and soon enough, he was good as new. Better, some would say, because he was pissed. Pissed off that David was out celebrating, rejoicing at the new age that had began. Goliath wasn't ready for his reign to be over, so he dragged his ass out of his hospital bed, broke the damn walls down, and went gunning for David.

See, in the Bible, David is the victor. He defeats Goliath and goes on to reign as King. In this story? David gets his ass kicked. He gets put back in his damn place, as a plaything for Goliath to fuck with when he gets bored. In this story, Goliath runs the dynasty.

And this fucking dynasty ain't over yet.
Posted by CaptNorris5 at 3:16 PM

God I love you

I LOL'd so hard at this point: "Then Goliath went to the DMC." Perfect.

Seriously one of the most awesome posts ever. I think the odds of us taking the Central Title are something like 0.45% according to Yahoo!, but you know what, I say, screw the odds and keep winning. Most importantly, I want to beat Chicago after they danced over our half-depleted team back in December. I want revenge. Little brother's got a lot to learn.

Hahaha. First time here at the Winged Wheel and that was a fucking winner. I'll be at the final game against the Hawks and it would be pretty sweet if the Wings managed to wrestle away the division title.

"Then Goliath went to the DMC."