Sharing the Blame: Hey, Babs, you're pissing me off.

This might be the only team in the league where when the players aren't responding, the only person not blamed is the coach.

Yeah, I get it. He's a helluva coach. 1 Cup, 3 Finals appearances, Coach Canada, etc. But go ahead and tack this little gem onto his resume: 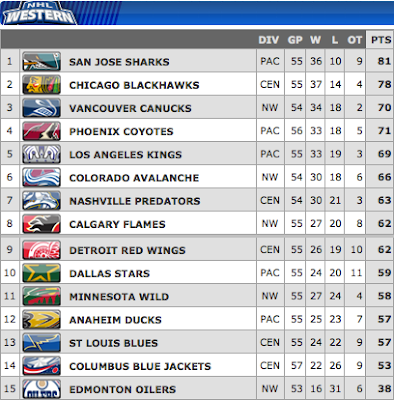 It's February. That dark grey line between the 8th and 9th spot? That separates teams that play for the Cup, and those that work on their handicap. Three points separate the Wings from the 10th spot. Five from the 12th. And honestly? The way the Wings have been playing lately, they should not be this close in it.
For the most part, I like to defer to Babcock. He clearly knows more than I, which - admittedly does not take much. Dude's got a resume. Dude know's hockey. Great. One problem: It's February and the Wings are on the outside looking in. Our schedule is not getting any easier. There's just two weeks to the Olympic break and after that we're looking at 21 games, only THREE of which are not against Western conference teams. If we play like we have over the last few weeks, there's no way we make the playoffs.

Should the Coach really not be held responsible? At all? Is it still a crime to cast derision on the guy? I'll be the first to overreact and scream and yell if this team makes the playoffs and he does not win the Jack Adams. But right now - the way things are going - that's not going to happen. We're hanging around in the standings, below the Coyotes, the Avalanche, the Predators and the Kings. Who among you legitimately believes that any one of those teams is, at least on paper, better than the Wings?

Consider the weapons the guy who calls the shots has in his arsenal. He's got one of the best top lines in the league in Pasha, Z, and Bert. He's got the best defenseman in the league in Nick Lidstrom. He's got some of the runners up in that category in Rafalski and Kronwall. He's got a hot goaltender who is standing on his head. He's got some of the best second and third liners in Filppula, Cleary, Helm and Draper.
Where does he have this team? Barely clinging on to the 9th spot.

With this post, I only submit that this is not OK. It's just simply not OK for the Wings to be on the outside looking in, in February. Not with this team. I've certainly taken my shots at blaming the offense, blaming the D, and - though I may be overprotective of Ozzie - blaming the goaltending. I think its time to really round this out.
I recognize that so far, I have not provided much substantive criticism. So far I've harped on nothing much more than the standings. Well, far be it from me to keep my mouth shut when it so perfectly fits my foot. A few issues I have follow: 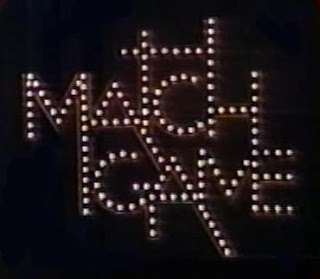 This has bugged me for some time. Specifically, my concerns here date back to last season. Yeah, that would be the season where the Wings could score at will. Sure, we had some defensive problems at times, but that offense was scary good. Nevertheless, Babs chose to worry about the matchups and juggle the lines depending on the team we were playing.

Let them worry about it. Why play down to the other team? Let them figure out how to contain Datsyuk and Hossa. Let them figure out who to match up against Franzen and Zetterberg. Just go out there and play the damn game. Hell, last season, Babs had what I'd call a "1-2-3-4-5 coaching" roster. The principal qualification of such a roster is that a coach could, every 45 seconds to a minute and a half, simply say "1-2-3-4-5," tap five random players on the back, and boom - new line.
As the crack team at NBC so aptly pointed out yesterday, Pitt was 6-0 when facing the shootout. They've got some firepower. To combat that, the Wings will need some goals. Recently the shootout has been proceeding pretty well with Dats, Z, and Bertuzzi. First shooter last night? Dats. Check. Second shooter? Z ... wait... Williams. What?

I get it, Williams has a laser and has performed well in the shootout in the past. So let him go fourth. Why mess with something that's been working(ish)? It's a minor gripe, but a gripe nonetheless. We needed that point. We lost that point. Not OK.

Ericsson: -10. Lebda: -7. Every time they're on the ice, you can hear the opposing coach start jumping up and down giggling like a little girl who just turned on the Happy Pony marathon. Does anyone really think this pairing is a great idea? Good idea? Anything less than an absofuckinglutely terrible idea?

I get that the guy doesn't have many options here, but why not TRY something else. For a coach who is so concerned on who gives the team the best shot to win every single night in goal, he certainly doesn't seem to give a shit about how his third defensive pairing effects things.

Speaking of which...
This is really the reason I sat down to write this post. Well, that and procrastination. But mostly the goalie situation. Here's a bit of a gem from yesterday's post-game comments:


"It's great, isn't it? It's called goaltending," coach Mike Babcock said. "He battled and gave us a chance."
Link - Khan @ MLive

"It's great isn't it... it's called goaltending." I wonder what that means? It's not very explicit.

Oh wait, yes it is. It's dripping with "Hey, guys, we just lost, but I want to say something important. Fuck Chris Osgood. I can't wait until he dies so I can piss on his grave."

Babcock took a shot at a goaltender who was NOT EVEN IN THE GAME. Maybe in normal circumstances I'd give the guy the benefit of the doubt. But his track record this season is pretty clear:
He's not a fan. So much so that he spent a good portion of this season jeapordizing the team's future by allowing a goaltender to sit in a bench for a month. Where he's off playing penny slots, watching Lebda and Ericsson fuck everything up together, with the goaltending situation, he's slapping it all down on green. He's slapping a cup-winning goaltender in the face by refusing him any playing time. And now? 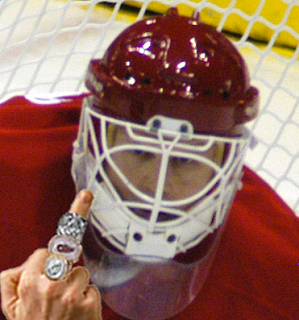 Not OK to bitch in the press. Not OK to slap him in the face, over and over. Not OK to let him get cool. Not OK to stubbornly refuse to change pairings that don't work, and shuffle the shit out of others like someone with an attention span of a jack russel terrier. Not OK to be staring down the barrel of missing the playoffs for the first time in 18 years.

Though, considering the record of this blog, he'll win the Jack Adams tomorrow. Wrong Cannon blast away.

Best blog you've had so far. Your passion makes my penis happy.

"Every time they're on the ice, you can hear the opposing coach start jumping up and down giggling like a little girl who just turned on the Happy Pony marathon" - LMAO!!

They gotta get Ozzy some fucking starts in the pipes....agree with everything you say buddy.

"Every time they're on the ice, you can hear the opposing coach start jumping up and down giggling like a little girl who just turned on the Happy Pony marathon" - fucking hilarious

I agree with everything you say, Ozzy needs some pipe time.