The Mule will don the Tre Kronor 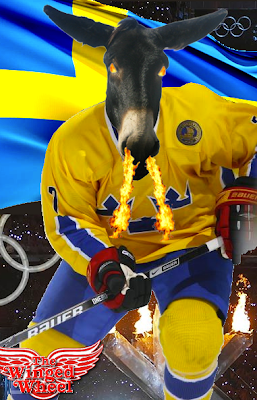 Things just might be looking up for the Wings. Big win yesterday to carry us into the Olympic break. Two weeks rest for several guys who have logged tons of ice time because of injury. Now, good news:

I feel bad for Homer. Considering where he's at in his career, this surely would have been his last shot at Olympic gold. However, for the Wings, this is a good thing. Homer's had nagging injury issues, and now he's got a couple of weeks to get that sorted out. The Mule has been playing like he's at 100%, but it wouldn't help to get him some conditioning on the world stage. Good times.

Personally, I'm pretty amped about the Olympic hockey. It'll give me a chance to watch the sport I love without all the stress. Don't get me wrong, I'd like Team USA to pull through, but I really don't care that much if they don't. Being a fan from the US watching Olympic hockey seems a lot like being a Lions fan: gotta root for the home team, but it's pretty unrealistic to think they'll ever win anything so it's more than acceptable to pick a second team. For me, other than team USA, I'm pulling for Team Sweden to repeat.

I'm still just happy that for the next two weeks I wont be fuming about a loss, but looking forward to getting Babs up that ladder.
Posted by CaptNorris5 at 3:50 PM

I wish Mexico was competing..